Have you ever written a block of code like this?

It's not awful, but it is annoying that you need to assign the result of User::all() (an instance of Collection) to a variable just to dump and die. Turns out, you don't actually need to. Instead, you can use the dd or dump method on the Collection class instead and turn this into a one-liner.

I wrote a tweet about this one a little while ago and it seemed like a lot of people didn't know about it.

🔥 I still see so many people retrieving the current user's ID as shown at the top of the image. Take a shortcut and use the Auth::id() method instead! https://t.co/P7eB1PJrt2 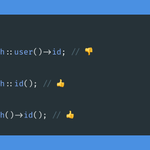 I think my favourite thing about using this method is that you don't need to worry about accessing the id property on a null object, you can just use Auth::id() and it will return null when the user is logged out.

Laravel provides a handy withDefault() method on the belongsTo relationship that will return a model object even when the relationship doesn't actually exist.

Now, if we try to access the $post->user relationship, we'll still get a User object even when it does exist in the database. This is known as the "null object" pattern and helps eliminate some of those if ($post->user) conditional statements.

There's a few different things you can do with withDefault(), you can read more about it here in the documentation.

I don't use custom Blade directives all too often, but when I do it definitely makes my views look nicer. One example of a Blade directive that I use across multiple projects is @nl2br

Creating your own Blade directive really isn't difficult. Here's what the @nl2br one looks like:

Under the hood, Blade transforms a Blade directive into a PHP string (or expression). In this case, we're writing the PHP code necessary to print out the result of nl2br.

The callback function accepts an $expression argument. This is what was passed to the directive as arguments. In the example above, that would be $note->content as a string.

That confuses people quite a bit, because they expect $expression to be the return value of $note->content, when in fact is it a literal string with the contents $note->content:

This isn't something related to your code directly, but it can definitely make it faster to write.

If you're one of the PhpStorm crowd, you've probably already got the Laravel extension installed. If you're looking for something a little more powerful, and premium, you should definitely check out LaravelIdea.

I've been using Laravel Extra Intellisense for a little while now and it has definitely given me a speed boost when it comes to getting the right view, configuration value or route name.

It's free, pretty powerful and feels just like any other intellisense plugin.

How to Customise the Logo in Your Laravel Jetstream Application